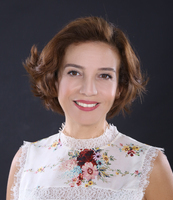 Lina Assaf is President and one of the co-founders of Teach A Child. Lina is married and has three children. She studied at the Lebanese American University and earned her Bachelor's degree in Sciences. While raising her children, she continued studying for a master’s degree in education. Lina was a very involved parent at her children school. Together with few other parents she founded the "friends of IC Elementary" whose mission was to promote a nicer school environment in the old IC Elementary Building. She headed the IC Parents Committee and was an active member from 2011 to 2014.